A fragment of our history…

The Hungarian Economic Association is celebrating its 125th anniversary this year: the inaugural meeting of the HEA took place on Sunday, 27 May 1894 at 11 a.m. in the first-floor conference hall of the Hungarian Academy of Sciences, chaired by Academic Lajos Láng. The founding members included some of the leading economists, industrialists, public figures and politicians of the age: Gyula Kautz, Sándor Matlekovits, Sándor Popovits, Miksa Falk, Kálmán Széll, István Tisza, Károly Mandelló, Sándor Hegedüs, Sándor Hollán. With the jubilee celebrations approaching, the documents from the past reveal some real treasures… 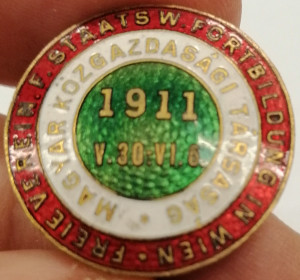 This time, a photo album with pictures taken during a boat trip in 1911 and a badge, presumably from the legacy of Lajos Láng, our first president, are here to remind us of the rich history of the HEA. Some of the photographs appear to be featuring Lajos Láng, subsequent HEA president Sándor Matlekovits, and the then secretary general Alajos Paikert Jr… Here is the history behind the photos.

At the invitation of the then president Lajos Láng, a delegation of almost 50 visitors from the Free Association of Political Sciences, Vienna (Freie Vereinigung für Staatswissenschaftliche Fortbildung in Wien) came to Budapest on a field trip between 30 May – 5 June 1911, received by the heads of the Hungarian Economic Association. During their short stay the members of the delegation visited the Museum of Agriculture, the Ironwork and Machinery Exhibition, the Luisa Steam Mill, the Ganz Electric Works and the MÁV Engineering Works, but they also took a trip to Tatabánya, Kisbér and Mezőhegyes, and participated in a boat trip to the Iron Gates. The photographs were taken during this boat journey. 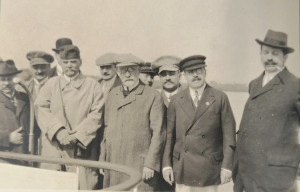 The group of our Austrian guests from 1911 – on the picture we can find Alajos Paikert, Secretary Gneral of HEA and Lajos Hosztpótzky, later President of the HEA

A report on the field trip was published by the Economic Journal, the official bulletin of the Hungarian Economic Association as well:

The ‘Freie Vereinigung für staatswissenschaftliche Fortbildung in Wien’ was invited to Hungary by our president, to participate in a field trip from 30 May to 6 June.

The president of the HEA contacted the Ministry of Commercial Affairs in order to undertake the organization of the field trip. 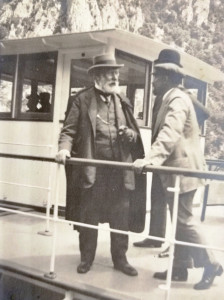 Sándor Matlekovits, later President of the HEA on the boat

The variety of programmes included visits to the Museum of Agriculture, the Ironwork and Machinery Exhibition, the Luisa Steam Mill, the Ganz Electric Works and the MÁV Engineering Works in Budapest, followed by trips to Tatabánya, Kisbér, Mezőhegyes, and to the Iron Gates. The Economic Association organized two reading sessions for the participants: Alajos Paikert, secretary general of the HEA on modern agriculture, and Aladár Edvi Illés, ministerial counsellor of section, member of HEA on the economic situation of Hungary, particularly the manufacturing industry and metallurgy, while in Tatabánya mining director Simon Jex delivered a presentation on the mining industry of Hungary and the development of the mining settlement of Tatabánya.

Naturally, numerous walks, dinners and social evenings were also fitted into the programme, providing opportunity for the Austrian visitors to meet prominent Hungarian public figures in a relaxed manner, with toasts and speeches delivered on both sides, emphasizing the political need for, as well as the economic and cultural benefits of friendly relations between Hungary and Austria.

The contemporary articles have been taken from the Arcanum digital archive. The cover photograph is assumed to feature Baron Lajos Láng, the first president of the HEA.